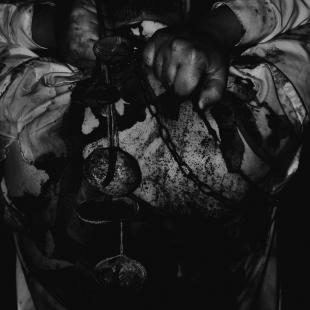 The landscape of music is a fluctuating entity. Forever steeped in growth and decay, contours shift and change, pathways are discovered and, occasionally, chasms open and landmarks collapse. Each new composition reveals an additional facet to an arcane and enigmatic world. I stand alone at the base of a dark, towering structure, gazing upwards: a monument to loss, endlessly pummelled by haunted winds at the edge of a tumultuous sea. How did I get here?

“I long to remove this heart, plant it in the ground, and grow a better me…”

Without solid foundations, one cannot expect to weather the storm. Ba’al sow their seeds with the title of their debut album, embedding their roots in the sadness of a figure who realises they will not see the future. The dark sculpture before me is grounded by Luke Rutter, who drums with a strong sense of composure as he tackles and enforces some truly seismic musical shifts, and by Richard Spencer, whose bass lines add both harmonious warmth and a commanding sense of upstream momentum as they navigate a maelstrom of soaring melodies.

“I inhaled the ashes of the world you burned…"

With foundations entrenched in fields of embers, the orchestration of guitarists Tom Arnold and Nick Gosling swirl untethered and intertwined. They ebb and flow with the pulse of the record, allowing room for reflection after each tale is told. Ba’al use emboldened and occasionally supplemental instrumentation to further outline their colossal craftsmanship: hostile, metallic and desolate, but nonetheless refined; oppressive and ornate in equal measure.

“Tears form rivers that lead to the sea…”

I realise now that the monolith is alive. Enshrouded by mist and encased in ivy, it bears windows that gaze further inwards than out. Whilst introspection is acutely balanced with the openness required to confront and make peace with difficult memories, there is also a looming sense that the transient, numerically dated compositions are inseparable from a deep and personal sadness.

Beneath the jagged exterior, a staircase climbs upwards; guided by flickering torchlight, a viola yearns sorrowfully for the soul of “Rosalia”. Vocalist Joe Stamps conjures one final, harrowing memorial, and we are reminded of the record’s daunting foundations.

As silence finally descends, so too does a sense of place; “Ellipsism” stands tall as a gigantic presence on the greater landscape of impassioned extreme music. A jet black pit of oil burns deeply at its beating core, fuelling a fiery beacon set to pierce through the shadows at any moment.