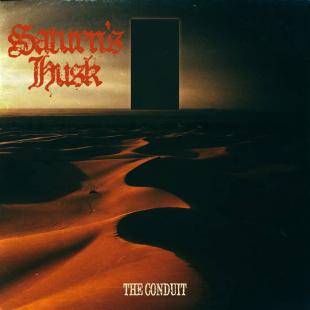 Presumably subconsciously influenced by the monolith in the sand cover, and the promise of space rock, the rather minimal sound of the opening Death of Imaginary Lights sets my mind travelling, to far off planets, to cosmic gales bustling through the valleys of giant dune laden terrains. Wherever it takes you, it provides the perfect accompaniment to your journey, setting the mood.

For the main players here are massive hulking tracks, tripped out but with a tempo dragged down by significant gravitational mass, to be as doom as it is stoner rock. This creates plenty of space and time, aptly enough, which Saturn's Husk utilise to good effect, through almost post-rock exploration and psychedelic textures.

There are some of the tropes you'd expect of astral themed psychedelia, but it's not all homogeneous to the burgeoning sub-sub-genre of space rock instrumental heavy psych. Where others infuse samples to suggest and supplement the astral themes, Saturn's Husk restrain. There's a mysticism propagated through the experimentation, evoking thoughts of alien or foreign spiritualism and far off travel. The mind wanders as a result, but where in others you can drop out, here you are are strapped in to the journey, staring through the rocket window, albeit with a substance-assisted glazed-eye stupor.

Guitars are given licence to go where they like, extrapolating, evolving, elongating passages until they become wild and free solos. Occasionally you'll jump ship as they head off aimlessly wormhole-wards, but by and large you hang on to the comet-tails to see where it ends. Occasionally there are purer stoner rock reminders, Spectral Haze being a perfect example, but even here it is drawn out over nine minutes, repeating and unrelentingly mesmeric.

You'll need to invest over an hour in The Conduit, and it'll feel longer. This isn't a criticism. There is a depth to it that you endure happily, not allowing you to be distracted from, instead invested within the experience, despite its fundamentally magical hypnotic nature.