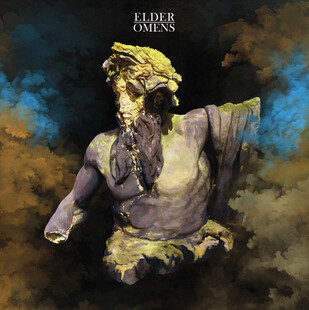 It seems eons ago since Elder's self titled debut arrived, then absorbed into the stoner rock scene, heralded yet even so perhaps not lauded to the degree a bit of perspective time now lends. They've blossomed further since into a treasured cornerstone of "our" musical world, their albums trustworthy sources of progression and light.

Last time out brought us Reflections of a Floating World, elevating the band to the heights imagined from the title. Omens now arrives and maintains that gravity-defying standard, a feat of consistency even more impressive than the rise. It is a blessing, evident immediately on the opening title track, subtle guitar touches, a bass sound carrying the warmth throughout. This flows through quite beautifully, the track length permitting variances that you track with glee, none wholesale, just a few seconds of playfulness here, a quickening of the tempo there, fully formed evidence of their craft.

As ever, Elder sit above any attempts at any singular genre definition, the full engagement it subconsciously dictates of you means that you fly along, as prog, stoner, classic 70s rock and more make their claims. See In Procession's muted opening flowering into a stunning psych synth and post-rock guitar partnership. Or the eleven minutes of Embers, shining through from a position of total confidence and ease, distant similarities to modern day Baroness or peak And You Will Know Us By the Trail of Dead. They have transcended the limitations of the stoner rock tag that was hung to them in their early days; a song of summer time contentment, raising itself for a understated yet euphoric ending.

All five offerings are lengthy affairs, but it never once drags. The longest is Halcyon, who's first five instrumental minutes are of a four musicians seamlessly acting as one, masters of their own existence. The vocals break the spell, but only to progress the track on to higher levels, indeed the construction of layers of beauty continue uninterrupted until its end. One Light Retreating performs its job of closing on a high, a gentle reminder of Colour Haze's long form journeys that sweep you along.

I get distracted writing this review on several occasions, a need to discard my need to record and simply give myself over to listening as a fan of Elder, of great music. The last passage of Halcyon, more than ten minutes in, stalls me for several days, its ending simply breathtaking. Omens is incredible, an album of rare craft, the type of which does not come round often. Embrace it wholly.