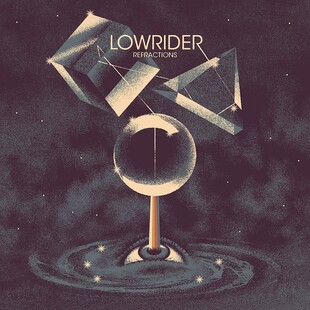 Towards the end of the 90s, stoner rock had broken through, the bass rumbling cadence of the American desert amplified globally through the majesty of Kyuss, Fu Manchu, Karma to Burn and many more. In Europe, the bigger names associated to the sound - Orange Goblin, Spiritual Beggars, Colour Haze - didn't necessarily ape the Californian sound directly. That element came elsewhere, typically Scandinavia and the Netherlands, led by Lowrider, Beaver and Dozer, with a burgeoning underbelly of a scene - the likes of 35007, Mammoth Volume and 7Zuma7 high and riding higher within that.

Lowrider were prominent due to their first couple of releases - the iconic split with the then newly formed Nebula on the genre-defining Meteor City label, and their lauded Ode to Io album. I still can catch myself singing Dust Settlin' to this day.

And here they return, in 2020, a decade passed since any previous release, out of the blue. I'm genuinely excited to see this appear, as well as surprised, but it is equally true that you wonder what they can offer now, so long since the heady days of the last century.

Six tracks long, Refractions is easy to digest, and as Red River opens, a warm familiar tone greets you, nicely beefed up. It rolls along, a steady re-acquaintence with a returning friend. The following Ode to Ganymede exudes an airy, relaxed sense of ease, the punchy riff a reminder of the ground laid by the band along with their peers of early pioneers. This is stoner rock with an assured cool, as it was and should always be. Even as it explores it never bloats, more a psych tinged travel, an incoming organ peeking through the clouds merely adds to the merriment. It is glorious; any doubts about a band returning so long dormant, within a genre so written off, evaporate into the ether.

Sernanders Krog is pretty nifty too. You have to remind yourself that the familiarities it conjures are in the large part because of the legacy Lowrider left to follow, particular for their fellow Swedes, Truckfighters high among them. Half way through this floats on a Californian desert heat shimmer, Kyuss a prevalent influence now as it was back in the ...Io days. You can sit back and bathe in the haze ending.

The next couple of tracks pass through with less impression, Ol' Mule Pepe a rocking garage driving roll along with more force - good but disturbing the nice chill they'd got me in, while Sun Devil / M87* is fine but forgettable.

They depart with a big eleven minute plus closer, Pipe Rider. Lowrider go here for a more emotional restrain, done with a subtle hand. I'm unsure midway through but it ends strongly, perhaps a touch of Whitewater or Spaceship Landing in it's last track wide expanse thinking.

This is, all things considered, a fantastic stoner rock album. I'm surprised at its strength, but that's more fool me I suppose. This feels like a hark back to the good old days, yet at the same time equally at home in this new decade.