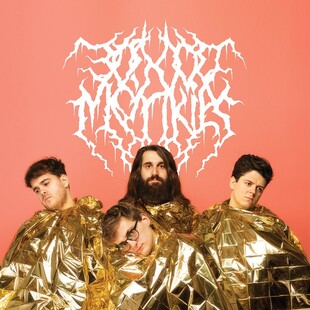 30,000 Monkies are a true anomaly. They obviously take the piss - look at that artwork, the black metal logo, the back catalogue of track names such as Keanu Riffs or Tom Wanxxx or an even stupider array of music videos that are simply hard to comprehend. Yet, underpinning every release, every song is music of serious quality, no fucking about.

They've been through noise rock, doom and out and out drone, and nail it each time without fail. The anomaly is evident, and may count against them (to me, they should be bigger than they are) but it is also what makes them who they are, the lack of pretension essential for the freedom to experiment and lack of fear to travel far and wide.

And Are Forever shows the fruits of that approach, an album concrete slab heavy, eclectic yet engrossing; often (not always) recognisable in its component parts but truly individual as a whole. Song structures exist, but always with a meandering artistic fidgetry - take A Gift where it is applied with cheap adhesive to doom weight riffs and a synth set to cosmos destroyer mode. Or the mesmeric opener Miles of Smiles, where hulking moments of densest doom reside within a disquiet of noise and skittish vocals.

The whole album is genuinely brilliant. I can't help but love An Earnest and Sincere Feeling despite itself - never committing to one strand despite there being several you'd love to explore further, and a scratchy 45 second intro that makes you wonder if anything is happening at all. And then, they blow your ears off with a riff, quickly curtail that and transport out into far space. When they do attempt to amalgamate the sounds, it's a psych metal doom noise hybrid of dangerously addictive proportions.

I could go on, eulogising each track (special mention to The Fist of Impending Joy) but its consistency allays the need. To throw a random hypothetical analogy in - imagine Mike Patton and Stephen O'Malley holing up in some desert shack studio for a month - not that they'd get near this quality - but if they did, it would be lauded as genius far and wide. Instead it is just another quirky release from the madcap little known Belgians.

Except it's not, it really isn't. It's masterful. If you haven't already, I urge you to get into the world of 30,000 Monkies and be grateful for their ongoing adventures forever more.