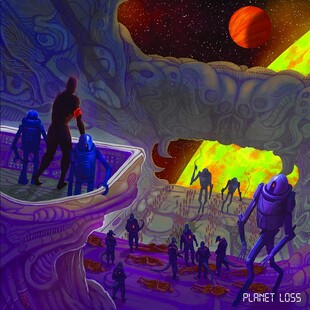 After an intro track of gurgling liquids, faint sample vocals and thruster release noise, Earthless crash lands, screech and gravity-disrupting riff-thuds announcing Wallowing's arrival. It destroys the land in front of it one slow trudge at a time, instantly addictive, something weirdly emotionally attaching in the mire. It maintains this ugly yet trance like state, under cosmic veil, for six minutes, before grind blasts burst free and purer sludge grimness reigns for the finale. That's a glorious way to announce yourself.

Wallowing are from Brighton and feature members with prior involvement in a grand list of UK doom and hardcore names - Prisa Mata, Surya and Herd Mover among them. It's not a surprise, for as an introduction Planet Loss is phenomenal.

There are times when the harsh vocals, grind, hardcore and doom give a Shrykull style blend, others where hammering riffs provide a central primacy around which vocals bark with ferocious passion. Hail Creature starts with a sound so decrepit it has degraded into sludge, decomposed so it oozes into a self-loathing mess on the floor; its like the best and the ugliest of our hardcore scene over the last decade or so, practice room or squat gig sweat and cider and pain and joy held within.

I'm still not over Earthless, and perhaps its worth noting as such that the album doesn't match that peak again. But that would be harsh - bollocks, in fact, because its sense of adventure and filth is one you want to, well, wallow in, album long.