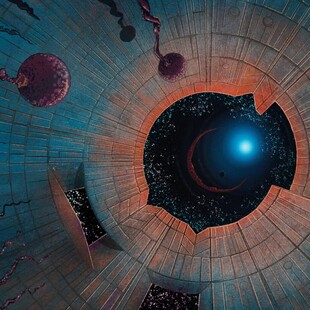 Slomatics' last album Future Echo Returns was the final installment of a trio of records (along with A Hocht and Estron, all outstanding), and with the trilogy complete, this is Slomatics unbound by their own narrative, giving them freedom to choose direction not predetermined.

Not that youd expect too much to change. Slow and low, you know how this goes. There are surprises, sidetracks from the script, but this is as likely in perception, that they're all about that pure tone, when in reality that's never been exclusively the case.

Yet still... is there a hint of a more trad doom feel here and there than before? Are the vocals gentler in moments, that portray moroseness or a laid back attitude depending on how you perceive it? I can't tell for sure, but notice variance on tracks such as Organic Caverns II or the excellent Gears of Despair.

There are elements that don't work as well, but they're minimal. And there's still all the hallmarks of the Belfast pioneers catalogue today. The ear-ripping brute riffs that hammer in metronome being the most obvious calling card, still alive and well here and there.

There's a nod to their camaraderie with and influence upon Conan on the fun Telemachus My Son, while the best is saved for Mind Fortresses on Theia, a compilation of all the best elements of Slomatics, from the primal force of the early Kalceanna and Agent of the Morai split days to the recent mystical pairing with Mammoth Weed Wizard Bastard - cosmic, heavy, melodic and monotone - all present, conflicting and clashing into a masterful whole.

And that's the beauty of Slomatics - that they continue to record such great music that at the same time has you struggling to quantify how far they've pushed their sound and yet sounds exactly like Slomatics. Let's hope that never changes.