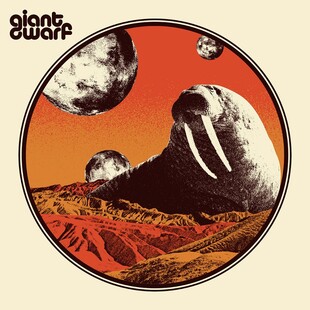 There's been a lot of more than decent stoner rock this year already (Duel, Irata, Salem's Bend for just three recent examples), a signal that the hazy desert sun has not yet set on the genre as some would have you believe.

Yet few mainline the sound so unashamedly as Giant Dwarf. This is pure stoner rock, equal homage paid to the debut albums of Queens of the Stone Age and Truckfighters, overflowing fuzz overloads and all the cliches, tropes and joys of the sound proudly present and correct.

It's there in the glorious cover, band name and fonts, never mind the music, which runs along as you fully expect it to. It'd easy to be cynical, but they pitch their deference to the sounds of their masters just right, and as such the album is an uplifting experience.

There's a lot of Josh Homme's influence all over, mainly QOTSA, safe to guess Kyuss too, but also in affiliated desert acts - hear the playful tunefulness of Masters of Reality in Strange Wool as an example. There are whiffs of the eccentric Desert Sessions exploration when they're not leaning more centrally on heavy stoner riffs.

It is a little inconsistent, the peaks poking above the clouds distinctly, and as for style it is what it is. Yet those highs, whether it's Golden Walrus or Kepler are a hell of a lot of fun, and as such it's hard to be too hard on Giant Dwarf.