Body Void You Will Know the Fear You Forced Upon Us 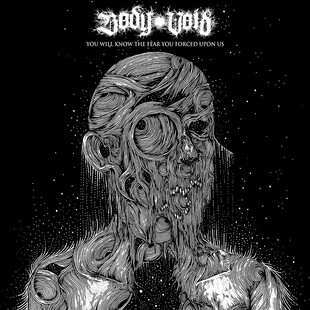 Strap in. Two twenty minute doom behemoths lie ahead, and if you're prepared for a drawn out introduction as so often happens with these lengths, you'll find yourself instantly flattened by a steamrolling riff at the start of Die Off. The vocals rip through the grime as the track pummels forward, a mid point between the cerebral sludge mire of Thou and the utter desperation of Burning Witch. The track shudders at the end of each note, a reverberation from the sheer weight landed. The first sign of release from the relentless decrepit rhythm takes fifteen minutes to arrive, the velocity increasing until a grind sprint towards the line at the end of a marathon of gruelling intensity.

Respite is found only in the time it takes to turn over the vinyl. Fascist Cancer races outwards, arms flailing, as if it has to fill a grind album of 20 tracks in the time allocated to just one. It makes for a hell of an experience, an imbalance in your wellbeing as it lurches from the full pelt beginning to dragged out riff eternities. It decomposes as it resides in this state, descending through the earth and into Khanate-dwelling subterranean caverns of darkness. It only begins the climb towards the light from going on thirteen minutes through, but even then only gaining momentum through violent claws and screams.

Body Void, now on their third album, move onwards, each step another landmark in doom extreme perfection. You Will Know the Fear You Forced Upon Us is a suffocating yet awe-inspiring marker.