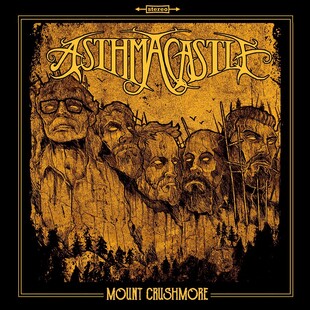 A bunch of friends (a Pig Destroyer among them) playing stoner rock on the party boombox, at full crackling volume with beers cracked open within held aloft fists. Comedy song titles, riffs large and littered liberally, and references aplenty to American and European stoner genre heyday of a decade or two ago - this doesn't hold back in its revelry.

Warming bass fuzz, hazy drawl along the vocals of the title track starter - yep, this is stoner rock, bold and proud. Think Dozer and the best of the Scandinavian sound of the late 90s, early 00s. The vocals become gruff here and there and it picks up pace and energy as it goes on, leaving a sludgier tread-mark, but it still feels from within a familiar realm, without sounding tired.

The excellently titled Mount Crushmore follows, wielding the warrior battle axe of Alabama Thunderpussy at their full metallic tilt, and then Age of Winters-age The Sword in the moments it takes a breath. It is generic and a lot of fun.

From there it does start to wear thin. The bold n brash sound becomes a bit boring, or at least naff. There are southern states rumblings and tips of the hat to earlyish Clutch which you can guess are coming a distance away. The ventures into sludge territories of Crowbar on the final track and on Methlehem give some variance, the restraint in tempo lending a satisfying aura of grandiosity.

It is ultimately an album that doesn't take itself too seriously, and for all its limitations will be enjoyed at face value rather than the over scrutiny a review brings. There are bands out there like this (particularly in the UK as it happens - Gurt, Ten Foot Wizard, Widows etc), and this will be a delight to their fans. And to anyone else, with a passing history within stoner, it is fun, just in small doses.