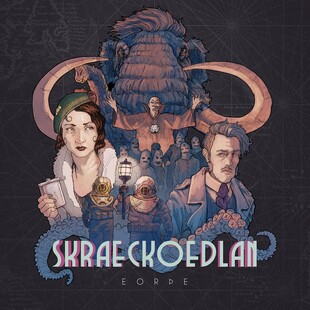 There are some immediate concerns though. The opening Guld Åldern doesn't pump the pulse and raises the worrisome spectre of an overly polished production that tempers any sense of danger. This fear does dissipate, if not fully disappears, across the album. And to get my negatives out of the way now, Skraeckoedlan's broad palette sound sometimes lacks for the highest quality through its continuity as it moves between or blends different styles.

That out of the way, lets focus on the positives, of which there are several. The second track Kung Mammut feels space prog with light stoner rock that fits somewhere between Abramis Brama and Dexter Jones' Circus Orchestra. It drags in the middle, but the retro synth astral noises return toward the end, the whole providing a sense of the true identity of Skraeckoedlan. This can be seen again later on, on Tentakler & Betar, with its delicious opening tantalising.

Then there's the really cool desert rock/Brant Bjork styled guitar repetition with low tone vocal chants that provide a mesmeric start to Mammutkungens Barn, a reminder of the best of the out-there Desert Sessions work. It is a disappointment when they break out of it before the two minute mark, I could have had this repeating as such, locking in for several minutes more. The space exploration experimental vibe of Angra Mainyu never develops into a song proper, but is as admirable as anything else here.

The most straight up stoner track is Creature of Doggerland, and the only blatant Truckfighters nod - mainlining Gravity X in its intro. It contrasts from the majority with a bombast driven momentum, accompanied by a fair weight too - this is hard-driven stoner rock, the adrenaline surges covering any lack of subtlety.

Skraeckoedlan tread the stoner lines of Abrahma or Deville, but at their least eccentric sound a little staid. It is an up and down release, as in their adventurousness you find a band to truly stand and notice. Thankfully, there's just enough of that spirit evident to make Eorþe worth the trip.