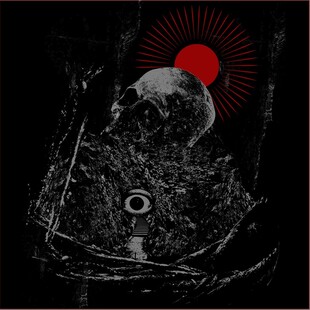 This split was announced late last year, and had anyone even with a passing interest in the dirtiest, heaviest, soul-destroying blackened sludge salivating. Primitive Man have lead from the front for several years now, and Hell blew many a mind with their Sentient Ruin released album a year or two ago. It promises to be an exciting, harassing trip.

Primitive Man put forth two tracks. The first, Oily Tears, is belligerent, utterly nihilistic. The whirring riff that flays its middle a flagellating hand upon anyone experiencing it. It is pure filth, and extremely good. Then there's Pitiful and Loathsome - the title couldn't be more dismissively disgusted, an apt portrayal of Primitive Man's outlook. Slow to develop, patiently wallowing in the undergrowth awaiting its time to pounce. When it does, it is with a frantic burst of energy and dread to be sure to overwhelm and disable its stalked prey.

Hell put forth Nuumen, and its lovely sludge tone. Lovely as in filthy, of course. The riff drags itself round, barely flipping over, until the hellish vocals arise from the depths. For all its depravity, there's groove within, constant reminders back to its early sludge origins that never fail to raise a smile. When the riff begins to rotate once more, eight minutes through, it feels glorious. I'm pining for their next album before the song ends.

As ever, to habitat Primitive Man's world is to be on edge, to feel dragged down, miserable and claustrophobic. Perhaps the format of short splits suits them - well, us the listener in fact - so as not to cause too longer lasting damage. And Hell continue where they left off, backing up their split mates enslavement of the light, to round off an unholy record that lives up to everything you would have hoped.