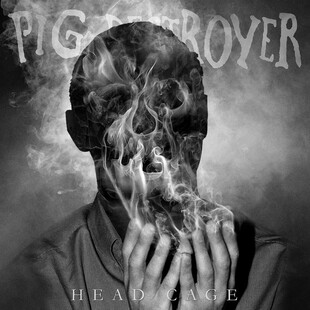 I'll admit to having a few misgivings about Head Cage prior to release. The band released the video for Army of Cops and it sounded.... well, it didn't sound much like Pig Destroyer. It sound like an actual song with verses and choruses and everything. It also wasn't being played as fast as humanly possible and you could hear all the notes guitarist Scott was playing. It felt very accessible and not bad, just a little un-Pig Destroyer.

Any initial worries are quickly dispersed when the album starts. After a short opening track, Tunnel Under the Tracks, with its background muzak and a disclaimer against any hearing damage the listener might suffer giving way to some tortured train brake and nails down blackboard sounds, it's business as usual on Dark Train. 1 minute 11 seconds of blast beats, cymbal grabs and dischordant riffs underpinning JR's gruff vocals about dissatisfaction giving a potential clue as to the bands branching out from pure grindcore. Army of Cops follows and finds its place on the album better than a stand alone track. It's still relatively straightforward hardcore, but it's done better than the majority of the bands who do this as a day job, and the second half of the track almost has me wishing that the band did more music in this style.

After a few listens, the old school grind on the album start to seem like its least interesting parts. There's so much on here that's good precisely because it's unexpected that something like Trap Door Man and Terminal Itch, the most classic PD songs on the album, struggle to stand out. For every bit of grind that you come to expect from the band, there's a standout moment that you might not associate with the genre to keep the album sounding fresh. Listen to the epic harmonised, reverb drenched guitars that open House of Snakes, the single note guitars and spoken work outro to Circle River or the almost thrash metal of penultimate track The Last Song (I see what you did there) as just a few examples.

If you think Pig Destroyer sell out every time they change basically anything (use a sampler/get a bass player/release an album with no songs under 12 seconds and less than 23 tracks) then you're not going to like Head Cage. Your loss. The band have already displayed their versatility several times over the years (think Mass and Volume or Natasha) and they've always shown they have the raw talent to make a first rate job of anything they turn their hands to. Head Cage is another example of this, folding their signature speed and aggression in with a more accessible side and elements of sludge, thrash and more. If anything, I left the album wanting more of the diversity hinted at here. They may have left the purists behind but for fans of everything heavy, this is an exciting record, both for what it contains and what it promises for the future.