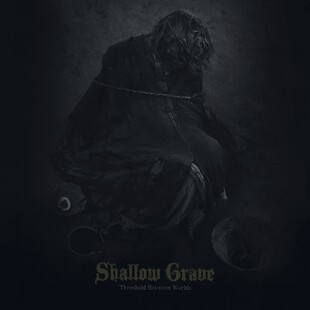 Ugly doom here lies in. A slow, threatening build acts as a portent for tempestuous wrathful storms ahead, sickened vocals entering to prove truth the forecast. Trapped within its labyrinth repetition of high walls of dread is an ominous journey, but by mid point of this ten minute long track, the disorientation settles and you embrace the bleakness, a glorious passage of cataclysmic riff and sharp noise winning you round to Shallow Grave’s pessimistic world view.

It gets even better on the second track. A gnarlier beginning, teeth bared growls erupt from the microphone and amps alike, a faster pulse that gives a British 00s sludge feel - Charger or Black Eye Riot perhaps. This is all later enveloped with a swirling vortex of chaotic trippy noises that strips the land of all features, further along rebuilt from scratch in the bands true vision. The architecture shown from then on is wonderful, Toner Low styled psyched tonne-weight doom, with a grimier vocal and outlook.

The noise, static and effect laden intro of Master of Cruel delves further down the smoke-filled warren for near five minutes, before being shook awake by harsh pissed off vocals and obtuse guitar. It is awkward, uncomfortable and dense, going on quarter of an hour all told, the sum not unlike Abstracter’s body of work. The title track closes, a noise of interplanetary battle between celestial warriors.

A bleak core with an experimental urge and psychedelic airs, this has something for everyone, a wondrous amalgamation of doom extremes.