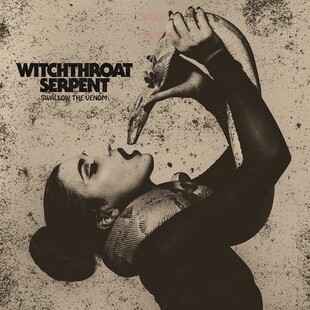 I spent a day in Toulouse once. After wandering around for a while, we stopped at a cafe bar in the middle of nowhere, ordered beers. A snake slithered past our street side seats, into the inside. We watched as the barman calmly took a hammer to the intruder, placed it in a jar, and filled it with some solution, before placing it on a shelf in the bar to pickle.

The relevance here? Well, (it's thin) Witchthroat Serpent are from Toulouse, and, well, serpents/snakes. It’s arguably a doom worthy anecdote as well, which is certainly apt. Witchthroat Serpent have been around for a while now, never shy in their embrace of occult imaged camp-horror heavy doom.

After an intro opener, the first two tracks proper are basically a poor man’s Witchsorrow, and sub-sub-Electric Wizard; Pauper’s Grave so much so that the song title is sung exactly as “Satan’s slaves” is on The Chosen Few.

It doesn’t improve, labouring through sounds heard before and heard better. Perhaps The Might of the Unfailing Source rises up as the peak among the trough, although how much that is down to any real quality in the track or the ease in which anything passable would stand out would require repeat listens I’m not going to give.

This feels tired, nothing original on offer. Even with plagiarism there’s scope for excitement, yet even that is largely denied. Avoid.