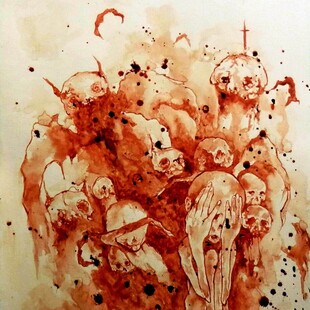 The name, the name... its as lazy as you can get in doom; give a thirteen year old a brief half-hour history of the genre and then ask them to come up with a band name and they’d probably come out with “Druglord”.

As such, you know what is coming. This sits between doom and sludge, the grimy wrapping applied by the raw production leading towards the latter, but with a stoner/doom writing structure. It could be said to be similar to a slightly less intense Lazarus Blackstar perhaps, or a de-swamped Fistula.

The first track is fine, but nothing more. The second meanders beneath the wall of fuzz, as is doom’s want, but never with a purpose. There’s variance on Rot of this Earth, an almost NWOBHM stomp, mixed with Saint Vitus era doom, a bit out of the blue. It’s oddly placed and overlong, but not terrible.

The same can’t be said for Buried Demons’ generic doom, and not much better for the following track’s stilted approach. It’s hard to work out what they’re really trying to achieve at times; it is slow, but unevolving, treading water in the same few feet. The closing title track doesn’t rescue matters.

For all the awkward unoriginality of the name, it does at least promise doom, which should in turn promise music we all love, even if on a base level. Despite the warmly familiar fuzz, we’re largely denied that as well.