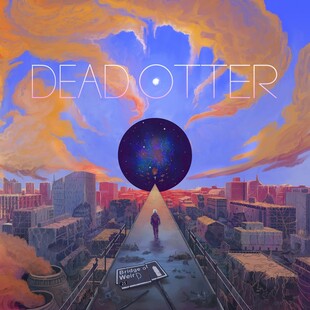 Glaswegian experimental psychedelic free rock, featuring Omar Aborida of the mighty The Cosmic Dead, this is Dead Otter’s first full length, almost inevitably put out via Riot Season, this being right up their galaxy.

Bridge of Weird is five tracks of exploratory space rock, like Blown Out but on less (or perhaps less overpowering) drugs; poppier and less down the spiral than, indeed, The Cosmic Dead. Eye Elevator’s spacey synth guided jams have an open agenda, traversing off on their own flight paths, never too dense, lightness in the tone and in the sense of fun attained with their freedom of adventure.

Waning is better still. Shining guitar echoes, a bright morning shine, full of optimism and play. Sounds strangely very alike a Smashing Pumpkins song (Sweet Sweet I think), albeit then launched through the cosmos and showered in space dust. The guitar noodling wig out increases to ridiculous levels by song end, which raises a smile.

There’s a surprising 80s heavy hair metal on the radio sound to the intro of LV-426, before settling into a clear-headed rock-out. The closing title track is nice and breezy, the tempo brought down, as eyes cast back to the stars, astral voyages on their mind, sat in awe of the cosmic views imagined. The mid-song injection of pulse brings a generous dose of 70s jammage, with a mellow ending leading out.

This is instrumental space rock from the shallow waters, never lost down the well, nor an introverted trip. You feel welcomed in, riding along serenely, the album serving as a natural upper.