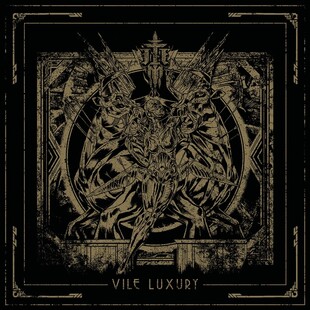 A brass section opening provides a dramatic entrance, then spinning off into whirring jarring harsh guitar, the ghosted vocals entering amass to an eerie, unhinged feel, a Portal meets Sigh unholy pit of malevolence. Welcome to the weird world of Imperial Triumphant.

This is psychedelic black metal influenced by the free structures of noise and jazz. It is the sound of a band locked in their own world emitting strange sounds from within their impenetrable cave of creativity. And we’re earwigging near the blocked entrance, wondering what creatures hide in the darkness. As a one off, you stay for the voyeuristic experience, but you know you won’t return. It is too detached, a curio rather than enlightening musical discovery, cold and distant.

The dysrhytmic approach jolts against any flow, lighter moments try to arrest the stagnation of the deathly cloud, only partially moving the tracks forward, distracted by their own fight against burial within the fog as they so often are.

Chernobyl Blues demonstrates this well. Slow, brooding, boring, for more than four minutes. Scream, black metal pelting roll and jazzy brass terrify the significantly more enchanting final three. The good and the bad of Imperial Triumphant encapsulated on either side of a single track.

Yet their crude welding of such distant musical styles is better illustrated on the following Cosmopolis, where a relaxed jazz intro gives over to difficult jolting riffs, lounge piano joining later. Here there’s a sense of fun, illuminating from within the danger of the increasingly deranged metallic elements.

It is more defensively abrupt than a band like Dark Buddha Rising, but more approachable than a Gnaw Their Tongues type protagonist. Familiarity helps - by the end I’m less deterred by the obtuseness and feel in tune with its sense of self, with it not against it. I’m certainly glad to have heard it... but doubt I’ll be reaching for it again any time soon.