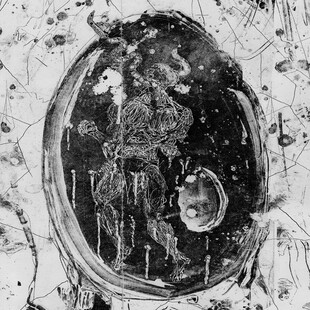 Malthusian have been around for a while now - their first release was five years ago - but Across Deaths is the Dubliners’ debut full length, out in September through the reliable Invictus Productions.

They lead into it with quite an impression, the opening Remnant Fauna a sensory experience more engorging than mere audio, whipping you into their whirlpool of the three pillars of the extreme world, death, black and doom; building on a death-doom template to blacken the air and suffocate, tendrils of chaos conjured similarly by Dragged into Sunlight or Diocletian.

Sublunar Hex is a demented Drawn from Ichor style descent to the bottom of the well, perverse vocals and strange noises accompanying the darkness. It doesn’t flow, awkward angular jolts scarred from the surface at every turn, but that’s the point, it achieves its aim of ill comfort.

There are negatives however. Primal Attunement... is a slow crawl, and across thirteen minutes I find myself subconsciously dipping in and out, damningly. It can be difficult to sit through this intensity for whole albums, and therefore its leeway is slim; subsequently when not at its peak it can feel like an turgid ordeal. There are other passages that lose the connection, the strapped in, eyes pinned open, submission freely given to it at its best.

It is between this contrast, of electrifying black hypnosis and moments that are easy to be distracted from that defines the album experience. Thankfully it rides more to the former, an unsettling call from hellish worlds, an artwork of darkness in extremity.