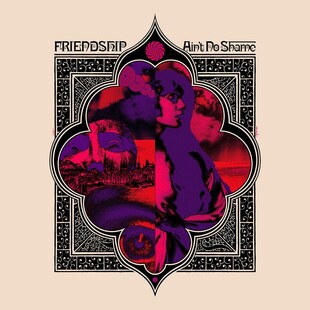 For those who have come here looking for Friendship, the Japanese ultrasludgegrind scarrers, turn away. This is Friendship of Norway, and you'll more likely receive a tab on the tongue and flower in your hair than a smack in the throat. That both can exist so far from each other yet both naturally within ninehertz's remit is a joy. And for those who have come looking for plain old friendship, well, ninehertz is all about the love so welcome.

This teeters on a highwire album-long, pitfalls of saccharine whimsy only a slip away at every moment. It often falters, but it is impressive how long they keep their balance, surprising with the enjoyment at several points. There's a shortish introduction with Are You Ready that prepares you, a cool hippy ditty with a nice early Aerosmith feel.

The mood is set permanently to 60s psych and 70s rock. Modern comparisons follow those similarly casting their eye backwards, the loose and free stoner vibes of The Atomic Bitchwax (3 era), or when the lounge funk appears and amazingly isn't terrible, fans who have come to love Church of the Cosmic Skull would do well to take note. It is in these moments, on tacks such as Harmony Turns to Sound, that against my normal instincts, I can't deny there's something pretty good within.

When it does wander too far, it can be cringey, Got Me Feeling So Good is just wet, I recoil from its soppy and sickliness, and when the following Moments is nearly as bad, this middle couplet make you wonder if the album has peaked, and preconceived notions that this lacks weight and seriousness flood back in. Live Peaceful, later on, reminds of funk, soul and early Chili Peppers... not good.

Fire also brings the funk rock groove back, and while undoubtedly naff, transcends criticism by being pure and likeable. Get with it. The harder hitting Alaska Night has a touch of the Kadavar or Mountain Witch, and the closing Truth in Lies spends eight minutes with (relative) far-out guitar noise and solo, to end with a bit of edge, at last.

Friendship have done well to truly channel sounds of bygone times, not just parody, not just proto doom for that matter either, and not just a modern rehash. It plunges bad depths, but ultimately it is a happy album.