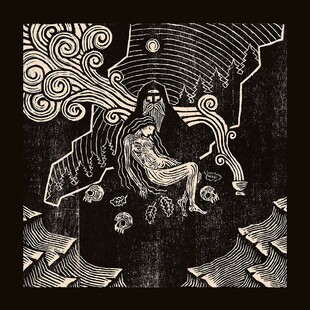 This is technically a re-release, Existencialista having previously existed as a hand-crafted, three mini-CD (one per song), abstract art packaged release restricted to just 39 copies. Iron Bonehead Productions have stepped in for a vinyl issue, somewhat diluting the ultra-limited rarity and the mysticism that comes along with that, but actually allowing people to hear it - and when it is as good as this, fair play to them.

The first offering is Uranos, containing some pure moments of spine tingling black metal. The venomous bite and directness brings to mind Wode, all with a distant yet distinct melody buried within, driving from deep in the thicket. It slows to a plod, losing some of its hold of you but maintaining a guard of the perimeter, a menace as whispers float on the wind. It bursts in and out of the pacier aggressive ends across the remainder of the eleven minutes.

Hesperidské Nymfy's almost doomy drawn out introduction lasts more than three minutes, forewarning what is to come with a couple of frozen blasts, the icy black metal that proves the mainstay then following, toeing a roughly honest Darkthrone line. All good, but less interesting that the opener.

Dryáda is restless and distraught from the off, it has an appropriately depressive delivery, yet this desolation opens grander atmospheres. It completely dissolves in the middle but for faint noises, of the wild, of the night skies perhaps. The return of instruments at the ten mintue mark are surprisingly sprightly, the burst from there lending an atmospheric-black edge, with even a jaunty riff offering light.

Although never wandering too far from known black metal markers, this is boldly expansive, warming despite its own coldness. This deserves to be heard way beyond the lucky 39.