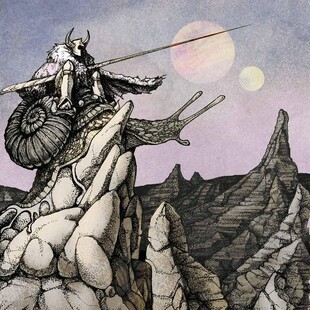 Originally released in 2011, Black Bow Records are rereleasing the iconic split between two of the UK's most impressive and important bands, Slomatics and Conan. The amazing artwork alone is evocative, the sounds within showcasing two bands who pioneered the burgeoning UK doom scene of the current day.

There's a long standing cooperation between these bands, built upon, back and forth across the Irish Sea. Conan regularly reference Slomatics as a central influence, and the links through the label and Skyhammer Studios speak of a lasting bond that has driven both on to maintain the high standards both held early in their existence, ever since.

Conan's side begins with Retaliator, which perfectly encapsulates why Conan are so successful. Heavy, dirty doom riffs played to repetition, the reverberations from the grimy guitar hooks feel like they'll shake my earphones off my head. Simply addictive. Following the sample and noise pause for breath of Obsidian Sword, Older Than Earth returns the norm - the sound of the thunder cast by displeased Gods. There is variation here though not long in, what sounds like a synth backing that adds texture to the Conan blueprint. The oppressive weightiness still remains, of course, eventually dragging it down to an almost stop, momentum having to be reignited periodically to progress. It is mastery of slow-doom, how to create such a belligerent, hulking beast with no pace whilst maintaining intrigue.

Lose the Five starts the Slomatics side, pure doom hanging dread, it could come from Electric Wizard's Witchcult Today. As it launches into the whirlwind of churning riffs that pound over and over, there's a smile inducing natural brilliance that hooks you in. Darkness pervades on the downbeat Black Blizzard, a voice shouting through the tempest echoing around to throw you off the source. Mont Ventoux completes the set. After half a minute of static and noise, this explodes. This is why Slomatics are known to level venues when playing live - damagers of ear drums, curse of landlords, weakeners of building's structural integrity. It is enormous, it is magnificent, a series of launched grenades with a beauty portrayed between.

An essential document of the best of modern destructive doom from our isles.