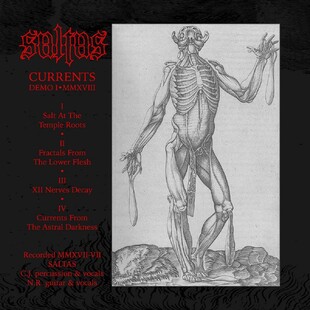 This is how to do death doom. Approaching from the death metal end, with the duo of Saltas arriving from Irkallian Oracle and The Funeral Orchestra, they strip everything back - tempo, instruments, notes - and replace with slow, dread-paralysed atmosphere. The two members trade vocals, a back and forth of deeper death and a higher pitched black metal voice from behind the fog, a feeling as though you're earwigging in on a conversation between two hellbound beings. It doesn't do much - naturally - but still feels exciting, a tangible electricity in the murky darkness.

And that's just the opener, Salt at the Temple Roots. This four track is an opening gambit of a demo, albeit one with label backing, on tape, via Nuclear War Now, with a further release already scheduled, possibly as early as April. The Swedish pair are on to something, a vigor in production opposed to the sloth-like crawl of their output.

Fractals from the Lower Flesh is much shorter, creeping in the shadows, minimal activity to keep its cover in mystery. XII Nerves Decay is so oblique so as to be pure drawn out doom, of Ommadon and the like, the death or black elements restricted to the vocal make up alone. It makes Salt... sound positively upbeat and overflowing, such is the lack of pace. Currents from the Astral Darkness casts similar bleak spells to close.

A real lesson in how to dampen the natural urges of death metal through doom lethargy, Saltas lay down quite a marker here. Admittedly it never reaches the same level of intrigue after the first track, but never the less, future releases will be required listening, starting very soon.