Eagle Twin The Thundering Heard (Songs Of Hoof And Horn) 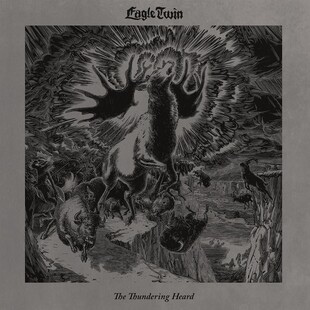 The Utah doom duo of Eagle Twin return. Their new album is out soon on Southern Lord, a label now in their twentieth year - they're still consistently supporting music that is always fascinating to hear, they've been a cornerstone for our scene since inception. They've branched out beyond doom confines, to black metal and crust in particular, always to have the back of innovative and interesting bands. The last 20 years would have been less interesting without their tireless work. Happy anniversary Southern Lord.

Back on to the matter at hand, The Thundering Heard covers more than fourty minutes across the four presented tracks. Despite the length, it takes no time at all to fall for it with the big, bellowing riffs with vocals to match of Quanah Un Rama; less than a minute in and it already sounds utterly great. Their doom is grand, a blues touch everpresent. The thunderous revolving momentum has a touch of Sleep in it, plus elements which stoner fans will draw too. The eleven plus minutes fly by, wholly enjoyable throughout.

Elk Wolfv Hymn steps back a little in weight and pace, reflective, it exudes a real sense of American storytelling, like Rwake can in their less unhinged moments, or Neurosis in the wallow. Heavy Hoof flits between stoner blues with gravelly vocals and sludge riffs - it is a sound that takes me back to late 90s, early 00s - the Scissorfight style vocals countered by Weedeater riffs in battle, back and forth. They save the longest for last, an epic voyage of doom in various shades - slow and dense, before the storm jitteriness, pummel riff outbreak.

I'll sneak in an admission here - I've never managed to get into Eagle Twin before, but call me a convert as this is unquestionably brilliant. It channels doom, stoner and sludge of high times past, yet does so in credit - it sounds neither dated not indebted to influence, instead merely an essential record for 2018.