Our Place of Worship is Silence With Inexorable Suffering 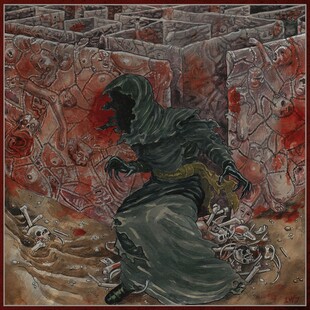 It begins, a guitar sound like a distraught, malfunctioning and possessed aircraft engine, hostile towards you from the very first second. It is largely an intro only, less than three minutes of plagued death metal with the more miscreant fringes of sludge, but it delivers the message.

Our Place of Worship is Silence, the Los Angeles two piece, have returned, a couple of years after their well received debut, and they waste no time in laying down the rules of the land. The's some serious death metal here, at times of the Portal or Altarage style head-warp variety, occasionally old school, often with a visit into black metal territiories.

There's a sharpness to the bitter tongue that excretes the hellish vocals, a pummeling drum and riff cannoning through walls and mountains on a heads-down relentless voyage. There's little light allowed, where it dares to interupt - the ending of The Blind Chimera and its Death for example - this attempt to flower is quickly consumed by darkness as soon as any sprouts begin to reveal themselves.

Labyrinth Disorientation goes through their sound most distinctly, starting with a fast paced, almost techy riff, mixes between the now accustomed barrage and then a more old school, 80s Floridian death metal approach. Elsewhere its largely a death/black whirlwind that is hard to separate between tracks.

What With Inexorable Suffering doesn't possess is a real outstanding track or passage - never mind a series of them - to truly elevate this to the higher echelons. Yet it doesn't matter too much - the overall feel, its consistent album-long living breathing menace, is its calling card, one that leaves you shivering, unsettled and wanting more.