Acid Cannibals Why Not Every Night? 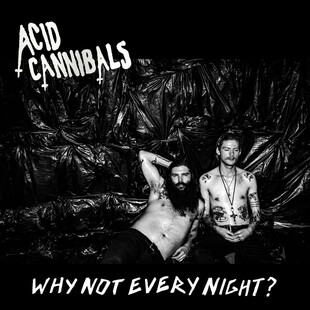 Acid Cannibals are a pair of Glaswegians existing on a diet of veganism, Buckfast and punk. One half of the band are from the mighty Cosmic Dead, a contrast quite stark from the headrush chaos on this EP, this presumably serving as a release and outlet for the riffs and blur and party not necessarily afforded in the vast stoned psych soundscapes of the day job.

This doesn't last long, four tracks on a mission to rattle through, be finished in time for the next round as soon as possible. There's a certain anthemic quality too, evident in the titular shout outs during the chorus chants of the opening two tracks. During the first, Are We Metal, it comes across all Judas Priest, the second the slight oddity of the name - Boy Music - wouldn't stop you raising fists, powering them forward and bellowing along where you to catch them live, I have no doubt.

The music itself reminds me favourably of the Dukes of Nothing, punk played with a metal roll and several beers down. The rollicking rhythm of Light the Rightning has an almost noise rock element, with a flair often missing in two pieces, before it all ends with I Put My Fist in the Air and I Disappear.

There's a surprising melody in here throughout, closer to the likes of Turbonegro, Gluecifer or Zeke (albeit at the most caustic and metal ends of any of those) than, say, crust or metallic hardcore leanings. It is a punk record that is enjoying itself. And for the ten minutes of its length, you will too.

Forums - Reviews and Articles - Acid Cannibals - Why Not Every Night?