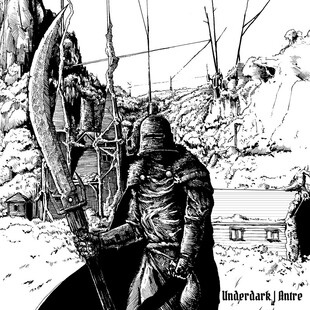 Allow me to digress before I begin... the artwork here brings to mind the Blood Island Raiders / Among the Missing split of many moons ago - a monochrome ancient battle warrior drawing - which in turn reminds me of how Among the Missing brought the best out of the bands they shared vinyl with - both the Raiders and Bumsnogger placing arguably the tracks of their lives on the flip side to the messy London sludge lot.

Don't worry, the tenuous links to this release don't just stop at the cover art, with AtM's Donny now in Antre, and so it follows that I predict Underdark to top their excellent EP of recent times on this one track each 7" of joint Nottingham black metal.

And so it proves, thankfully justifying that distracting review beginning. Underdark take the first track and then blow you away. It builds grandly, sounding amazing, fierce vocals, incandescent guitar similar to Jotnarr; pauses, then launches into aggressive modern black metal, akin to Wode. It is intricate yet powerful, it flowers yet is constantly heavy. It is brilliant.

Antre are a touch rawer, a more direct Norwegian channel, their fourth track released, the rumbling cloud guitars create the dark atmosphere, while the vocal changes from almost whispered to throat lacerating outburst add a dynamic and danger. As it evolves, bringing Antre into new realms above and beyond what they demonstrated on their demo of last year, it is reminiscent of Cold Fell, the Mancunian band that somehow wrenched emotion from black metal without any compromise in ferocity.

All round excellence then. Both bands on the rise, inspired by the challenge set to match each other on the split and each producing the best music they've done to date.