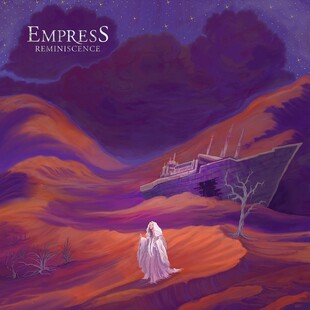 Elder are fast becoming to musicians what Pallbearer are to journalists - a constant reference point of doom aspiration. Plenty have claimed recent inspiration, and now here's Empress, a Vancouver trio actually formed from within a crowd of an Elder gig.

Not that they're the most blatant of influences on the self-released Reminiscence, although the development for large scale grand visions within doom by Elder, Pallbearer and recent Baroness is allowing others to approach with a more mature angle on what can so often be a primitive sound. Fourth track They Speak Like Trees probably bares this out more than any other, closing in on ten minutes it echoes a lot of those patterns of planning and expansion. Particularly at its end, as it all draws together, you can't help but feel the benefits of the approach.

Earlier on this five track EP, the sound is more akin to the other end of Baroness' career, the belligerence of their early days, touches of Kylesa, and harks to Hark (although the passing resemblance of one the band to Jimbob Isaac may have swayed this thought). It's all there on the opening The Offering, satisfyingly weighty riffs, bellowing impressively, although never truly launching from behind its influences into something original.

It is on the follow up Immer that they make their own distinct mark for the first time. I've no idea if this is played as happy music, but it has a smile inducing momentum that doesn't shake. From the rumble of the start, to two and a half minutes in when I can hear early QOTSA from their carefree and dangerous early days, albeit through a heavy doom filter (although this quickly passes). Before it reaches even half way throughout it changes tack more profoundly, flowering euphorically in a way heavy psych, post metal or even post black metal can achieve in rare moments, it truly shines. The track as a whole is fantastic, great through every passage.

Reminiscence is not perfect - it feels like early days of a band finding their way - but it is hugely likeable, with a couple of ready made fully rounded tunes already - and full of promise.