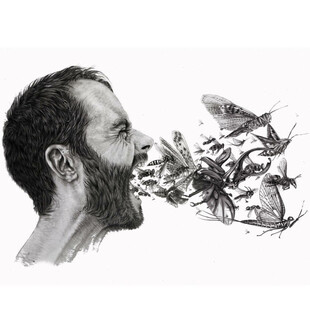 London's Strauss have been around for a while now, knocking on the stoner rock door of acclaim in our country's limited scene, yet never truly justifying it to date. There's hope for them - their past releases have been flawed but showed inklings of a band on the right path, but perhaps now is about time to deliver.

After a decent but unfulfilling opener, 2016 launches with an encouraging garage punk spirit, of Nashville Pussy for example. Unfortunately this is followed by patchy 90s hardcore vocals, as if an unearthed Downset album has strayed into their range of influences unbeknowst. It is odd. Sadly, this is exacerbated by JB Taylor's negative eccentricity, sounding damningly nu-metal. A quiet middle reins it in, but I'll doubt I'll ever make it this far in again. The terrible start returns to haunt at the end anyway, depressingly. Ugh, what happened?

Sharpish on to the second half, with Pantomime, a Primus funk beginning... and then it sounds like Incubus. A screamy buzzing latter end cannot save it. Rumbling drums lead Lit Corners into an overly grooving sub-Clutch type thing, similar to Oxford's Desert Storm, it isn't great... it is much better than what preceeds, but then that doesn't take much. Distant is an admittedly improved ending, restraint applied, consistent in not jumping around several incompatible styles at the same time, a slight reprieve to end.

Bummer. My hopes from beforehand have been drained. From the not terrible beginning, it deteriorates quickly into bad places. Lets just say it isn't for me and leave it at that.