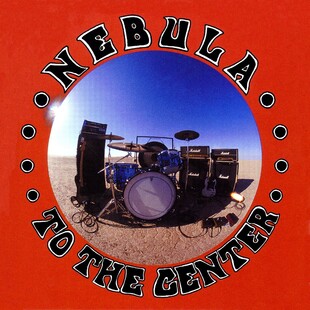 For anyone into stoner rock in the mid to late nineties, during its truly great period, Nebula were one of the bands who forged the path, who personified this exciting, fresh and cool genre. Forged out of resignations from the early incarnation of Fu Manchu, Nebula sounded familiar - that Californian sense of ease - yet distinctly different, the band that brought garage rock into the baked fuzz riffs of stoner way before the indie mainstream picked out The Strokes or White Stripes as their saviours.

They started life with a slew of short releases, the labels that put them out telling in how good the band were - Relapse, Sub Pop, Man's Ruin, Meteor City. They are all still vibrant, vital records, and the Heavy Psych Sounds label has teamed up with the band to release three of their earliest output on beautiful vinyl in time for a worryingly dating twenty year anniversary.

First up is Let It Burn, their first EP. Instantly you can hear the stoner gone garage dirt sound. Down the Highway, the second track up, is iconic, part of the Stoned (R)evolution compilation curated by Walter from Roadburn, alongside Kyuss, Sleep, Orange Goblin and more, it reminds of a time when stoner rock was a genuinely thrilling genre to be within. It is raw, simple and rocking. Across the album the blueprint is set, not just for the tracks here, but for their career going forth. Variance is offered with considered nuance on Raga in the Bloodshot Pyramid. A trance and trippy style change for Nebula can't come as too much of a surprise, but as the title gives away, this is sitar lead gentle rhythms of an Indian vibe, and it is done extremely well, mellowing the mind. It breaks up the album nicely, and displays Nebula's skill, endearing them to you.

Second is To the Center, Nebula's first album proper. For all that this came from their productive early period, and as their first proper album you'd think a defining statement, it has always been a little patchy to my ears. It starts exuberantly, the title track awesome. Following the dopey, stoner trudge as it finds it feet, there contains an opening line of "taking off to the centre of the universe", some space echo synth, fuzz to the max; this is how it was back then, how it should always be. This is stoner rock brilliance. The album bobs along from there, never hitting those heights, despite decent moments such as Clearlight and Between Time, the latter of which sounds like a fuzzed up stoner rock Jumping Jack Flash.

The final re-release is of Dos EPs, itself originally a part re-release of two other early EPs with a few as then new tracks added in. The first four tracks here are from Nebula's 1998 split with the fantastic Lowrider. Here more than anywhere else, their Fu Manchu history is most evident - sounding like No One Rides for Free, as of course it is going to do. It therefore provides a thrill in hearing more of the same from that great era, but then it's probably the least representative of the subtle shift in sound Nebula quickly achieved and then followed. Fall of Icarus from here is possibly my favourite Nebula track. The next four are from the Sun Creature EP, which contains the organ assisted lounge garage of Smokin' Woman that carries a self knowing strut, but with the naff lyrics is more cheese than cool. A shame. Fly On is better, the piano and drum middle is really nice, dropping down from the cluttered garage air into the hazy atmospheres of 70s psych. The then new tracks are all good, especially the buzzing guitar Whole Lotta Rosie vibe of Rocket or the full on slacker cool of Long Day.

Across all three records there are two bonus tracks each, live or demo recordings, all decent enough, all doing little enough I haven't felt the need to note them in the synopses above. They're fine, but they are not what will raise interest in these reissues. It is the chance of reminiscence, of revelry of a simpler, greater time. And it is for the sweet vinyl. And so be it, for they are worthy albums of special care, love and (re)attention.