The Thing Nightmares for Children (and Other Stories) 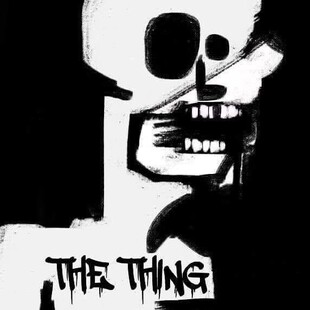 The Thing, from old York, are self proclaimed hypnotic funeral drone, and its a pretty damn accurate descriptor. As the volume rises more than four minutes into this one track, 32 minute release, you become aware of the first sense of a psychedelic mindset, the blunter edges softening under increasingly colourful skies, the air trapped beneath thickening, it continues for several minutes in this haze, lulling you into hypnotic stasis. It is relaxing, refreshing.

You hear the chants from a chapel congregation as the atmosphere resettles, several minutes pass by, a recharge as a mist settles, reminiscent of the quieter ends of Jesu. A reinstatement of loudness next, quickly oozing into the dense trip state yet again as it does so. Where am I? What am I supposed to be doing? Are we still on the same song? It's not half way through and I find myself completely lost within, not fearfully, but completely intruding on your sense of time and purpose.

Past half way, still heavy, still trippy, it is at this point somewhere between gentle industrial rhythms, the psych ends of heavy doom and post rock experimentalism, all with constant drones charting the path forward. Following a period of metronomic pattern and patience, the industrial elements flare up now, but all within the grand swirl previously cast. I'd love to experience this live.

The beginning of the end, post metal grandeur buried within the bold drone outpourings. Repeat, the intoxicating cloud closing in further in the final moments. A bell tolls... it ends.