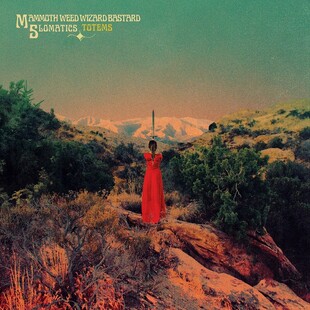 Everything about this split, from the moment you first hear of it, lay eyes on the cover and finally let it loose on your ears is exhilarating. Two of the finer names within the prosperous doom scene from our isles, Mammoth Weed Wizard Bastard and Slomatics have come together in collaboration - not just by lumping some spare tracks they had lying around on to opposite sides of the same vinyl, but by working towards a cooperative theme. From a shared base of Skyhammer Studios, the bands looked to create something special. They have succeeded.

There's often a preconception around Mammoth Weed Wizard Bastard, with their name commonly used as the prime example in derogatory conversations about the ridicuolus nomenclature within doom and misconceived belief that such silly tropes equate to lazy unoriginality within the music itself. This tends to last up until they've actually heard the music, and ends there. MWWB are serious doom contenders. It is evident across their two tracks, covering 23 minutes.

The Master and his Emissary begins with a minute of pulsing electro, from there taking its time to build until ethereal vocals enter four minutes through. It is similar to the lamentably-no-more Undersmile, in the way it clashes vivid colours of light and dark, a heaviness retained, a walloping riff crashing behind the whispery output of Jessica Ball that casts eyes to the skies, introducing space rock psychedelic swirls into your imagination, setting you off towards the stars along the long lead out from there. Eagduru is heavy from the off, imagine Conan fronted by Chelsea Wolfe, an intoxicating proposition. It pegs itself to a repeating metronome of riff, mesmerically so, akin to early Toner Low in the way the repetition acts to lull your senses, lowers your heart rate and create a warm trippy sensation despite the weight and pressure applied.

Slomatics have been around forever it seems. Long may it contine. Still going, still strong, still the leaders of their field, it is invigorating to hear new material, each time without fail. Ancient Architects dives straight in, instantly straight up Slomatics brilliance. Despite being an influence so wide, theirs is a sound still so distinct you can hear it within a second. It is a thrill. This is immense; there are elements of space between the heavier elements that air this out creating something truly compelling, then when they launch forwards it is destructive, beautifully so. At time of writing, I've just completed my top 10 songs of 2017 for the annual ninehertz article - I've now got a sure nailed on starter for my 2018 list.

Silver Ships Into the Future is short (relatively - still near four minutes), spaced out piano and faint distant noises, acting to clear the mind and cleanse the palette before the closing Master's Descent, whereby the safety net beneath you buckles under the strain within seconds, more Slomatics tone management master class. This has less of the lighter release, heavy riff interplay of Ancient..., until five minute through it slows and contracts into a slow psychish doom with proggy outlook, aided on the vocals by MWWB's Ball. It is a grand ending.

It was always going to be more than your usual split release, exuding quality and excitement in every facet. But it delivers over and above, a thrilling pairing, and a must have when the vinyl is released by Black Bow in March.