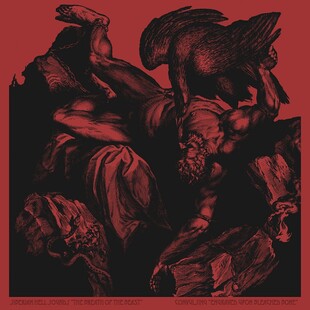 I've been listening to a lot of Australian music over the last year or two, all of which fits within one of two broad but definite groupings, where seemingly great scenes have grown and multiplied - namely the psychedelia of King Lizzard..., Mt. Mountain, Hotel Wrecking City Traders et al, and truly extreme extreme metal. The Art As Catharsis label has pitched two Aussie bands together for this split, and while the track lengths don't give an indication of which of the two (both twenty minutes plus), they're both most certainly of the latter.

I've spent a lot of time with previous Convulsing releases, but this is my first experience with Siberian Hell Sounds, who offer the first track here. The Breath of the Beast is extreme metal that takes from multiple genres, carrying a momentum that is really travelling, with lurking black metal skylines similar to Wiegedood's atmospherics. Six minutes arrive - the track could end here, but after a brief pause to refuel it re-engages its assault. There are post-metal dynamics at play, not just in the elongation, but in its structure, alongside hanging doom dread. There isn't any generic post- quiet quiet loud, but the dramatic stops and restarts provide drama and illumination within the otherwise blacked out barrage. By the end the sheer noise swarms in ever closer circles above your head, before abruptly relenting into silence. It is hugely impressive.

Convulsing's track, Engraved Upon Bleached Bone begins very Portal. No bad thing to follow in the footsteps of such innovators, but the allegiance to the sound of their compatriots is slightly distracting. That said, it sounds immense, no pale imitation; a force of nature, wave patterns crashing forward with a mighty weight, retracting and going again cyclically. Only a quarter of the way through it dissipates into quiet - minimal noises give way to gentle guitar. It erupts from there, thrillingly, barreling along until it deconstructs again past the halfway mark. There are harrowing murmurs in the air during this downtime, and the disheveled guitar that reappears is hesitant, delivering dread and anticipation equally. It drifts a little from there, unsurprising but unforgiving in such long tracks, but there's time to recover with a flourish in the ending that reverberates around your skull.

Glorious in the extremity of metal, this is a compelling and seductive despite its ugly outward demeanor. Yet more Australian greatness.