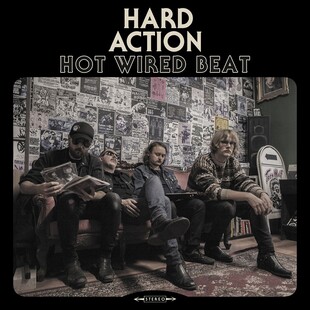 Awash with the spirit of hard rock revelry, akin to The Hellacopters, The Shrine and recent Kadavar, Finnish foursome Hard Action do not want for confidence.

Hard Wired Beat feels traditional, natural harks back to 70s rock n roll flair, but feeling perfectly modern; it is confident and forward but that verve placed into the music as opposed to any brash bravado - it feels neither cocky nor irksome. The opening Free Fall sets things up perfectly, true energy that transmits, to get you dancing.

Nothing Ever Changed carries thoughts of latter Graveyard, and the blend of Rolling Stones, 80s punk and 90s indie alternative of Hostile Street is nice. They lose their way a little in the middle, unwisely reducing the pace, removing the focus applied earlier, the energy dropping and too much passes by.

There is a faint reminder of Bad Wizard's Keep High Stay Low later on, on Knocked Down, Dragged Out, decent Kiss meets punk cojoinment that pokes its head up from the downslide, but then final track Tunnel Vision returns the good times altogether, excellent stoner up front carried with an ease that exhudes cool.

An album that rises and falls, the drop from the beginning is deflating. Yet there's a charm in the highs that'll outlast those concerns, with tracks that'll fuel your fires.