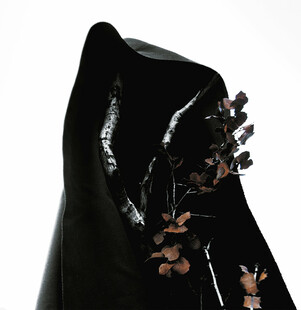 Portuguese band Process of Guilt present their fourth album in little over forty minutes, a feat for brevity for a band that operate in the same dark circles as the sludgier elements of ISIS did in their earlier days. Consisting of five tracks all around the seven to eight-minute mark bar the title track, Black Earth is the group’s first material since their split with Rorcal in 2014. On that split, my introduction to the band, they brought an industrial touch to their doom inflected post-metal, with vocals sparse and subsumed by the instrumentation. It came as somewhat of a surprise then, when the opener on this album named (No) Shelter erupted with pace, dense guitars and persistently angry vocals sitting higher in the mix. Feral Ground follows and brings about their signature sound. Process of Guilt literally sound like a machine – a metallic, mechanised clang seems to be the centre of their style, where all other creativity and experimentation emanates from. If Justin Broadrick decided to create a heavy post-metal counterpart to Jesu, using some Godflesh schematics, then perhaps Process of Guilt would be somewhat of a kindred spirit.

Servant broods in its beginning stages, slowly but surely building and picking up a little pace here and there at times too. However, it never really crescendos to any sort of euphoric destination. This really is a criticism to be laid against the entirety of Black Earth. It’s all very well being accomplished and able to build atmosphere, but there needs to be some form of release, a reason for that patient menace being conjured. One cannot simply get away with the adage “the journey is more important than the destination” with this form of music. I must admit it’s my gripe with many industrial metal bands. Your music literally sounds like steps on a path. Can we at least take a look at the view once we get there? And where is ‘there’ anyway? Did we actually get to ‘there’? I’m not convinced we did.

The title track is a similar movement in our guided tour of purgatory. It’s not bad, not by any means, but it really doesn’t inspire me at all. I can’t get worked up about it enough to chastise it and mourn ability and potential lost. Similarly, there are precious few instances where I feel the want or need to provide focus on positives. The tracks hulk their way through whatever passages have been created and a few cool phrases are repeated so often they lose their invective and initial meaning. For a species of post-metal, Black Earth seldom employs much meaningful dynamic changes. When they do happen there’s no bridge to enjoy the transition – a quiet bit just happens and then it ends because the chug, cymbal crashes and uniform vocals have appeared again by happenstance.

Hoax rounds off the album in a similar fashion, but happily with far greater purpose than that which has gone before since those opening minutes of (No) Shelter, or maybe I’m just happy Black Earth is coming to an end. That sounds extremely harsh, and it’s not really meant to be. Process of Guilt’s fourth album will, I can only imagine, be very highly regarded by fans of the band’s previous three albums, but I find it tepid and at times quite uninspired. As time marches on though, I find myself far more bellicose toward bands and music that overall don’t seem to challenge themselves and the listener’s expectations, and, as such I found it difficult to listen to Black Earth multiple times. I just wonder whether they might consider reinvesting and investigating the change up of sound they created on their split with Rorcal. There is more material and potential to be mined there, I believe. For now, Black Earth is solid output, but nothing to set this listener’s world alight.