Ba'al In Gallows By Mass 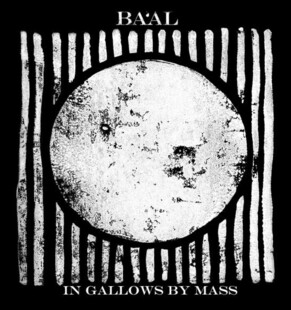 Holy shit this sounds good from the first few seconds. But then, it was always going to wasn't it? Following some of the best live shows we've seen at 9hz towers in recent years, Ba'al's determined rise to prominence hasn't been quiet.

Several parts doom and sludge, crossed with a bleak post rock influence and hints at black metal poking through the ugly armour, bludgeoning is the adjective that comes to mind immediately as the furious Black River comes to the fore.

Live, the band relies on a wall of sound and vocalist Stef's screech and howl to create a harrowing atmosphere and it's clear to hear that's been captured here too. The vocals and overall guitar tone give it a sad, almost lament-like feel. While it doesn't stray into My Dying Bride territory in terms of gothic gloom, the likes of early Anathema and tinges of emotional black metal like Ghost Bath surprisingly raise their heads.

The unrelenting attack of the five-piece is made all the more obvious by Stef's clean vocals which cut through the fog to chime in with the growls and screams.

Songs here clock in at a mammoth 10+ minutes each and twist through the genres like so many gnarled tree roots.

Personal demons seem to come to light on the epic One Under The Sun as Stef's voice rings out over some distinctly post rock/math elements, which again, are totally unexpected. Take a look at the roster with which Ba'al share their label. The twisted prog of Under, the blunt violence of Mastiff, not only are they in good company, they join a massively varied group under APF and for this the label should be applauded.

But if Ba'al are the oddities at that party, they do it with style. Drums flatten any notion that post rock is for wimps, rolling and majestic one moment and blasting with disquiet the next. Keys or samples even sneak in under the sonic chaos at points. It's been said on these pages before, but a real late 90s/early 00s influence from the likes of Relapse Records and Hydrahead have had an undeniable influence. Think Isis at their most caustic or perhaps the much-ignored Buried Inside. The sense that Ba'al have many more ideas than are packed into this 30 minutes is palpable already.

Closer Days of Yore pummels and delights in equal measure. Showing what can be done with swirling emptiness and a sense of layering it lays out a path that others will be striving to follow. We've remarked before that we've never seen a Sheffield band rise to such levels of creativity or prominence in years. This record proves why.

Forums - Reviews and Articles - Ba'al - In Gallows By Mass