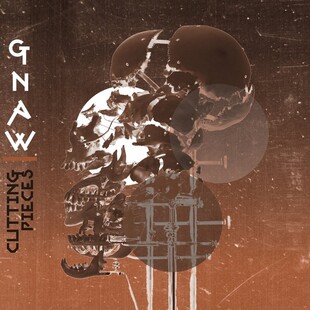 Gnaw are a band who are open about their goals, the press release for their latest offering referring to the piece as a 'harrowing' third album and pointing out its 'cinematic terror' intentions. To an extent they achieve this with Cutting Pieces certainly bringing to mind video nasties and some of the more extreme genres of horror.

A stand out is the second track Septic, a repetitive black metal riff pummels away over some very effective tribal drumming before giving way to a doom tempo crusher. Combined with the vocal which I can only described as an anguished self pitying squeal slightly reminiscent of gollum, the effect is certainly arresting, as the track fades out with the vocal lowering to a menacing whisper the soundtrack brings its industrial influences to the forefront. Sadly this turns out to be the high point of an album which peters out to violence infused doldrum.

Evening mood music for the sadistic then? Perhaps, but there is a distinct lack of substance here. I often found myself bored to tears, particularly in the latter half which gives way to long, eerie soundscapes with little in the way of structure and Alan Dubin's tortured screeching front and centre. Even the most committed will likely find they can endure one or two renditions before it finds itself firmly on the shelf next to the snuff film collection.