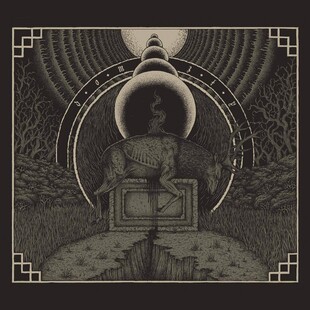 Here's a record to herald the end of summer, leading into darkness and demanding you follow. Dom Zły, from Poland, comprise members of several other bands, and it shows, as for a debut this is highly accomplished. Self-identifying as crust, it is suitably intense, yet contains much more.

From the first track proper, Bór, there is the notable presence of blackened hardcore, akin to Dark Circles and the like, a ferocity in the guitar, harshness of the vocals. It is noticeable, starting from Psy, how there's a hidden but definite upward inflection in the guitar tone that hints at light, where none is seemingly offered. On Tramp, very Cursed in nature, it is there again, contrasting against the furious vocals. It is excellent, slowing in its second half, providing further variance.

The self titled fifth track recalls Celeste or Sibiir, more time given than previous allowing for a solemn quiet middle passage that erupts into Black Monolith-style atmospheric black metal magnificently. The closing W noc turns the tables one last time, the heavier end of post-metal in architecture, it gladly doesn't follow the blueprints so closely as to generically build to crescendo, ending just as itself; providing one final development on Dom Zły's brief offering.

This is quite something, a record I'll be playing a lot. It harnesses the powerful motions within crust, hardcore and atmospheric black metal, never weakening its sound nor its viciousness to accommodate. Brilliant all round.