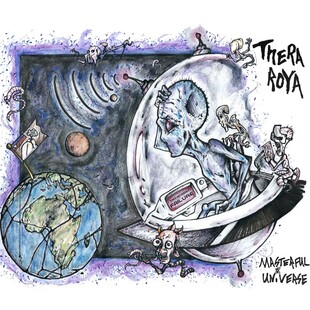 Brooklynites Thera Roya return with something like their ninth release in the last four years - prolific output, even though the majority are short players, as here, a two track, thirteen minute EP. I can't fault the method, particularly when it is as magnetic as this.

First up is Static Transmission, a single riff gorged upon across seven minutes, subtly varied, backed by noise at one turn psychedelic, at the next haunting horror screams (at one point reminiscent of the most depraved shrieks suffered within Come to Daddy), the latter drawn out for minutes, the return off the riff and vocals a crescendo heavier than before. It is done well, the self restricted limitation generating that repetitive metronomic daze that doom can do so well, sensory mind control.

Confused Population ventures further from its central base. It takes half of its allotment to really get its hooks into you, but as the sprightly paced lighter end guitar battles not only a more plodding doom crawl, but once more an unsettling, deftly applied sampling noise, there's a real sense of excitement. As this converges toward a new further, bolder riff ending a couple of minutes from its end, that amalgamation of weird and heavy a reminder of, for example, the warped minds of 30,000 Monkies, it confirms Thera Roya as containing a reliable unpredictability that earns them a platform above many of their peers.

This is a great way to spend quarter of an hour.