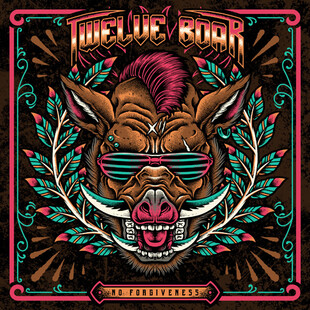 I know I'm not going to like this before I start, my feelings on, as they describe themselves, "party metal 'n' roll" are of innate abhorrence. But Twelve Boar (a recent and subtle change in name from XII Boar) are a known name in the stoner / doom underground of our land, so I'm heading in, and trying to restrain preconceptions.

These aren't helped early on. Steppin' Up's too clean guitar sound is complimented by very Americanised vocals. I'm hoping he is actually American, it's the only forgivable explanation. With its catchy riff and cheesy lyrics it channels Alabama Thunderpussy covering Kiss, but I'm struggling to hold back from criticism. This breaks on the following Golden Goose, which starts as southern US stoner, all fine then.. rap. Rap metal. No!! Why?? It is cringeworthy.

In this context anything is better, and third track The Curtain Call is certainly so... but how much is hard to tell given the abomination just witnessed - anything would stand up here. I do like the lyric "I've got my lipstick on, it's time to throwdown" admittedly. There are Clutch reminders here and there, and Bad Wizard, both natural pointers for music as such. Some bands of similar tastes appear to force themselves through a happy go lucky shitface backslapping smilefest just to fit the gimmick - not so Twelve Boar to be fair, as Snake on a Lead proves; this is a band living it, you can sense their own fun, even with the oddball vocals. The heavier riffs of Elders from the Deep could soundtrack a Jackass keg party, something I guess they'd be proud.

Even at its best, which is far from my realms of comfort anyway, there are bands who do this better, more authentically - take Grifter for one. You can bring the party to doom and still retain respectability - Chubby Thunderous Bad Kush Masters are proving as much. But the vast majority who try are terrible. Twelve Boar may be at the top end of that group - but best of the terrible is as much praise as I can muster.