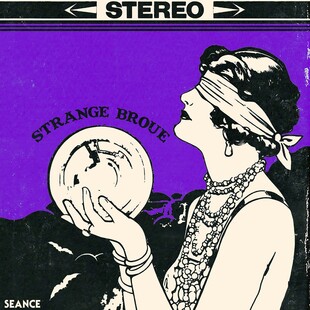 Oh dear, it doesn't take long to peg Strange Broue (from America, not to be confused with Strange Bru, from Rotherham). Seance was released earlier this year, now getting a vinyl release, and they do appear to be making a stir. But it is impossible to see past the obvious.

From early on in the opening Ritualize, it quickly dawns that the only ritual here is one of worship at the feet of Electric Wizard, the obligatory religious mass sample leading into as direct a mimicry of a band you could imagine. This sounds like an offcut from Witchcult Today, although realistically pulls from anything and everything between Come My Fanatics and Black Masses.

The misery gut Dorset mob seem like no other in inspiring such faithful copies; where other influences are used as building blocks, the Wizard so often are found in facsimile. I wonder whether it pisses them off? I wonder why it is? Perhaps a link to copious drug use among their fanbase, fuck knows.

It's there again on Slave Till' The Grave, blatant, to the point where I'm involuntarily singing The Chosen Few over the top... "Satan's slaves"... They fare slightly better, originality wise, where they are loose with their song structure - Kill What's Inside Of You although still the same is more a narcotic-fogged psych jamming trip, L'Invocation offers organ-inspired gothic ambience, and The Mystifying Oracle is several minutes of cinematic eerie noise. Nothing great in itself but at least a break from the criticism I've felt elsewhere.

Yet in general, where the music isn't providing constant reminders of the dopethroned, the samples and stylistic vision step up to do the same, the occult, Satanism, religion in general all lazily referenced. Take the 11:23 minutes of Cults, Crimes and Covens as a prime (but not unique) example, of which surely only 14 year old boys will ever repeat play - after a minute I wait for the song to start, after two I'm worried it ever will, after three I start skipping ahead - and rightly so as it never changes, a waste of your life as a boring shitpile of the most tedious "edgy" samples of news report after news report of acts of Satanism are dumped on you as they laugh at you for how they have just pissed away time you could have been doing something - anything - better.

There are many who do exactly this, and this is by no means the worst, but there are several who do it clearly better, typically by adding a distinction for themselves beyond the immediate. Take Dopelord, Salem's Pot, Belzebong or more. It is, as long as you like the central resource (and I do), undeniably listenable with full commitment to their theme, so you can get a lot of enjoyment here if you drop the cynical eye. But ultimately the main feeling it conjures, from a few seconds in to an uncomfortable lingering sense long after it has finished, is - what's the point?