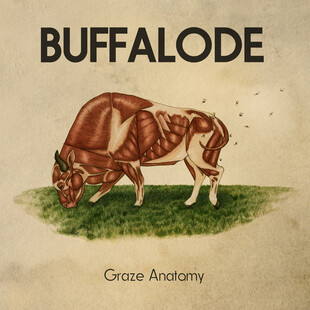 Lincoln, once a cultural wasteland is rising up lately with a community of new bands that are straddling stoner rock, weird post punk and then oddities like the band we're about to spit some truth about.

Buffalode are a two-piece, and like a bikini are set to thrill from the opening strains of this belter of a record.

Some of the tunes here are re-recordings from past efforts, but the frankly huge production makes that a moot point. More rounded, heavy and just crystal clear, the simple mash of guitars, drums and vocals means you're hearing every last element.

Influences you could say come from a somewhat disparate reach. Sure the goofball calling cards of Zappa, Primus and that ilk are here in big, fun spoonfuls. However, listen closely and there's a stoner rock thing happening here too, but that's under a manic and almost demented sense of humour. The squiffy blues riffs are contorted here into acid-like visions and there's all sorts of things going on with the drums you fear collapse from both players at times.

The likes of Stalagmight, Stalagmight Not burst with such energy you might struggle to keep up, the reworked and one of many highlights Cane Toad Purse swaggers with a 70s stomp that recalls glam.

Fuck, we've not even got onto the lyrics. Vocalist Chris has a mind exploding with puns, daft imagery and delivers it with all the conviction of those kind of blokes you sometimes see shouting at war memorials.

Witness the long-standing live fave Maybe I'm a Mollusc, the only song you'll need this year about bivalve shellfish. It's pondering lyrics seem to be written from a lost perspective, with a paranoid, winding set of riffs that build to a tone-led payoff. Did I already say this sounds massive? Here's some more adjectives, voluminous, huge, magnificent, gargantuan, right big. If the sheer fireworks on this track don't get you, you might not have a pulse.

If you wished stoner rock would cheer up a bit, that blues had a rocket under it or you just need some frustration melting noise, Buffalode might be your bovine of choice. Sick, but in a good way.