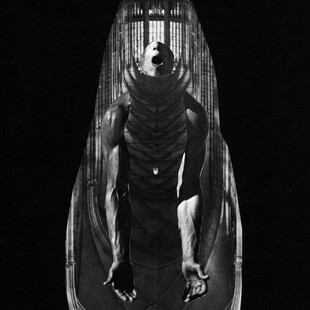 american are the latest band of a growing sound that amalgamates, bastardises and runs amok through a conglomerate of extreme metal genres, pitting black and death metal with doom, drone, and an unhealthily prominent heartless industrial rhythm. The net effect is akin to Full of Hell or The Body, but with pointers to Godflesh, black metal experimental pioneers and noise abusers abundant.

Visions of Great Faith's repeating riff and bleakness maps this out from the start. Yet for all the dour oppression generated, it is hard not to get carried along with it, as opposed to beaten down as it presumably hopes; there is an upward inflection buried but peering out from the murk that makes this so appealing (before ending with jarring industrial electronics). Necklacing launches full blooded into black metal stratospheres before ceding the floor to electronic pulse experimentalism. There are tracks just of unwholesome noise, occasionally with sample, often pure mechanicalistic churn.

The outstanding Bedsheet Ossuary brightens the sky with highly energising drum intro, giving over to a guitar that offers light, the blackened and croaked vocals swamped by yet intertwined within the overall sound. It is aspirational, open atmospheric black metal with a skyward trajectory. It is oddly beautiful. On Amorous and Subdued, a jaunty Ministry type beat opens, before an almost gothic drama unfolds, lingering and further developing and stretching the adventure exhibited album long.

Eclectic but coherent, it maintains interest throughout, brilliant at times, even if the high points are admittedly found earlier on. Violate and Control is an album that evolves, twists and attracts... it may have failed in its objective of unsettling me as the listener, but this is only to its credit, a surprising engagement through the coldness that is hard to shake, on an album that will be hard to forget.