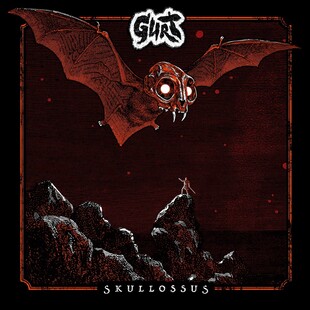 If you're a pre-existing Gurt fan, stop reading, you won't like this review. They have a solid fanbase, they work hard, they do plenty to promote the national doom scene and I respect them for this. I've enjoyed some, if not much of their past releases - their split with Limb comes to mind. But I can't get into this.

For one, the "party doom" tag, which bothers me way too much than it should, something only a couple of bands get away with in credit. It is clearly Gurt's shtick, driven home through the pun-filled titles and lyrics, but it only serves as a distraction and as it is so thickly applied it takes a fair bit of effort to erode or ignore. Take Battlepants, where the track title is repeated in an entirely silly manner, but not endearingly so, just naff.

All of which would be forgivable if the music beneath held up, but it's a mixed bag, at best. Too often the sludge/stoner is innocuous, little to distinguish it from the crowded sound. When they do find something varied from the norm it too often brings unwelcome reminders - Double Barrelled Shot-pun for example, the first track to stand out with a touch of groove unfortunately then brings up memories of bad-years Machine Head, and there's even a vocal in one of the tracks that has me unwantingly dredging up nu-metal references of memories long-buried. There is a constant air of nods to the potential influence of Far Beyond Driven and We Will Be Dead Tomorrow.

At one point, Beavis and Butthead intervene to state that Gurt suck in their typically dismissive manner. For all my moaning above, this isn't the case. I've probably overran with a few irksome moments, and there's nothing wrong with comparisons to Raging Speedhorn per se (although Pantera less so). There are positives here, such as The Crotch Wobbler's middle ground of stoner, doom and sludge that adds a Clutch element to the dirty swinging rhythms, and even some of the puns (John Gar See Ya Later) crack through my granite faced misery and raise a chortle.

Maybe I should have just ignored this, but I probably needed to get my beef with this whole cheery pally doom amusement in-joke thing off my chest, plus we're not here to just review positively nor to cherry pick. Maybe I'm right and the focus has shifted too far and by too many away from new, exciting and deafening angles to fearlessly advance doom in life-affirming boldness. Maybe I'm a grumpy keyboard warrior who needs to stop wallowing in depressing doom. Butthead may be wrong, but the truth probably lies somewhere between.