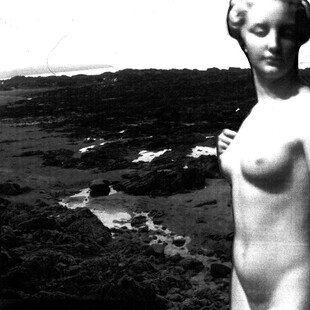 Another appetising Broken Limbs Recordings release, the pairing of Mancunian and Texan black metal bedfellows will likely be of most immediate interest and surprise to the followers of Andrew Curtis-Brignell's Caïna, who we all thought had recently and lamentably ceased to operate. Were reports of their demise exaggerated?

Sadly not, for their solitary track here, Rhosneigr was written, as far as I can tell, between the monuments of Setter of Unseen Snares and their swansong full length Christ Clad in White Phosphorus, only now seeing the light of day. It instantly demands attention, through a dramatic drum heavy opening, before their familiar industrialised black metal frosts the atmosphere, accompanied by fearsome vocals from Laurance Taylor (also of Cold Fell). Expansive in the mid section, it is subtly broadened, even lightened, above the mechanical churning riffs beneath, this itself later overlayed by sombre noise effects, the track now triple layered with each element still audible, the ensembled effect acutely impressive, a parting reminder as to the x-factor Caïna always seemed to possess that stood them out and above.

Cara Neir's entry nestles in between a variety of genres without wholly identifying with one, as the most interesting of extreme music does and should. This holds base within black metal, but with punk venom from the off, later on developing wistfully to spectacular effect as the pace lessens.

As with all seven inch splits, it's all too short, but mighty fine none the less. A cacophonous, fitting goodbye from Caïna, a further and unexpected death throe remembrance to only extend the regret of their end. But where there is death there is also life, and Cara Neir, for whom a busy 2017 lies ahead, signal all manner of possibilities open to them; a band to keep track of closely.