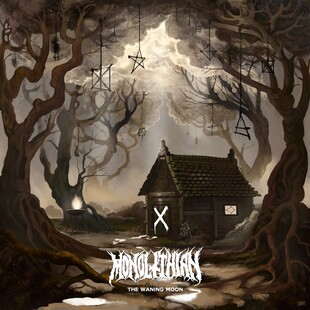 Cornwall's depressing doom duo return, reason for a cheer even if you will find none in the album. Monolithian have steadily released glorious, dispirited doom for half a decade now, probably fair to say without the recognition they deserve. Every time new music of theirs appears (usually with little fanfare) it confirms and enhances their reputation for those who have fallen under their spell. The Waning Moon, made available digitally on April Fool's Day, does not mess around.

Little has changed of course, within the drum and bass set up and gloomy genre confines, but as ever they close in on perfecting their sound and produce some amazing tracks. The three staples of Monolithian's monolithic doom - slow, heavy, miserable - are immediately evident on Crone. Drums whirring like the blades of a helicopter hovering worryingly close, the bass rattling a pneumatic drill reverberation through your bones, the dual vocals shrieked, portraying an infectious pain. Here, perhaps more prominently than before, the inclusion of vocals from drummer Shannon add a little but new and welcome dimension.

Nyarlathotep is placid in its intro, a presumed calm before tumultuous storm, yet the release is restrained by their standards, the track open, the mood of Spring unusually cast. The Mountain Bows to No One is prime Monolithian, where a caustic, raw bass beginning is built upon, vocals blackening the skies. An undeniable groove is thereby developed, a sludge riff in amongst the trudging depressive doom. They have always had a knack for catchiness (for want of a more suitable word) in the dark corners, where you would never expect it - it marks this instantly as a track you'll be repeating for some time to come.

Ixodes plunges the depths, bend-inducing torturous claustrophobia, the midsection riff bountiful to the end, the vocals now no more nuanced than deep uncomforting screams. Mantis Rider closes out, rolling along on a chugging, sludging riff.

Monolithian have delivered again, strengthening their grip on their sound, so that while they wallow in familiar waters, few do it exactly like they do, and even fewer do it better. By taking the best elements of ponderous, ominous and bleakest doom, and applying unrestrained momentum, riffs and the occasional hint of groove, they continue to deliver, the superb The Waning Moon the proof.