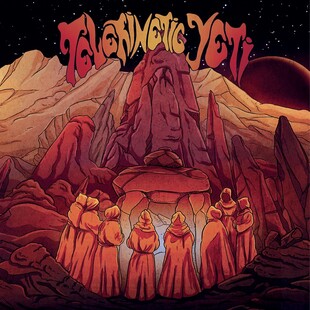 The increase in doom duos continues unabated. The magnificently titled Telekinetic Yeti are the latest to reach our ears, all the way from Iowa. The mood is largely brighter than the standard for such set ups though, this following in the line of good time merchants from Red Fang to Clutch, but with a doomier edge ever present.

Take the opening title track, the faint sounds from the past of Clutch, but perhaps from their early EP era and its harder surface, rubbing up against Big Business two piece reference inevitability in a warm hug front door welcome. They're never fully committed to vocal inclusion, with several tracks remaining wholly instrumental, Electronaut an example, with its jittery loose bassy rattle barged out of the way with Sleep-ish riff a minute and a half in.

Stoned and Feathered is very Red Fang, the 'Yeti's call to arms, or more precisely a call to intoxicants of your choosing, a plea to come together, to party and to rock. But it isn't all doom Andrew WK that I may be making out - the following Colossus attempts to evoke the presense of its title, beginning with a fiery intent, but simmering in more serious doom climes thereafter.

There are odd nods to The Sword here and there, particularly in the last couple of tracks, Beneath the Black Sun rocking out like their best; Himalayan Hymn ending it all on a great note and a weighty heaviness that thunders through you. It's worth mentioning Apophis too, akin to the ominous entry of a Conan-riff-sized bearded doom warrior at a summer fete. Less than two minutes, it is so daunting they don't even bother writing a song around it, letting it merely stand there in its own splendour.

The artwork is familiar from a thousand stoner demos over the years; two pieces are almost passe nowadays, and the good vibe doom they espouse is more often than not cringeworthy, outside of the leading exponents. But Telekinetic Yeti rise above, partly through nous in structure, the smiling tone underpinned by some bellowing riffs and more melancholic doom output that eradicates any predictability, but chiefly through a few great tunes.