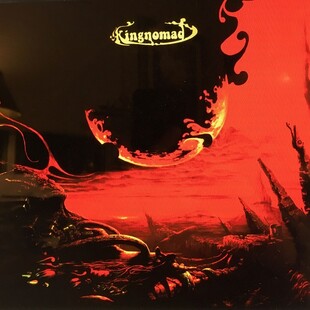 There's nothing new to Kingnomand's dynamic and it looks like they're not too bothered, admitting as much straight up. Whether it's the heavy rock of 40 years ago, or the stoner/psyche of the last couple of decades, they tread where many have before, with no pang for innovation. So it just comes down to the tunes, and they have some, that's for sure, and an album that just feels nice throughout.

There's a glow emanating at all times, the offshoot of a production that embraces a thin coating of ubiquitous fuzz. All the best elements are probably best brought together within The Witches Garden, a retro feel, a touch of early Graveyard, a psychedelic hand keeping things loose and airy, a breeze through hazy mornings. The following The Green Meadow Part 1 and 2 latches itself more directly to a stoner rock mast, and despite the vocals struggling to hold a little, it is reminiscent of another of their Swedish compatriots Truckfighters, in their lower octane material. Lucifer's Dream recalls the more playful tracks of the doom-rock of Witchcraft, piano assisted as elsewhere, such as the intro of She Wizard leading into a fair stomp of times past, a guitar solo and organ assistance ending multiplying the nostalgia.

Fair chunks of the album drifts, but always on a cloud so that the lesser moments at least present a pleasant background noise to chill out to, it's never an irritant, maybe a smidgen of frustration the only negative emotion it arouses, in that this is so close to being something special but just misses a jolt to rise above. Some ideas not fully formed or fleshed out, you sense a band finding their feet.

However at the same time, Kingnomad demonstrate a capacity for a real nice blend of 70s rock influence, an album that sits well alongside Asteroid's latest from the end of last year. Stoner fans with psyche leanings will take a lot from this, and there's a potential flagged here to keep Kingnomad's name to mind for the future.