In the Company of Serpents Ain-Soph Aur 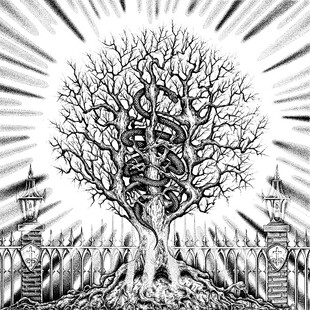 In the Company of Serpents have been a bastion of doom consistency across their previous releases, a Denver outfit under-heralded for some outstanding output. Their basic two piece set up is always centred upon, but only in incredulous tones, as with the best of the four legged, of how they manage to create such monstrous sounds between them, so much so I'll try not to mention it again here.

Pre-release chatter from the band threatens a pull back on the throttle of doom riff rattle, and so it proves, startlingly so, but not that you'd know it sitting through the opening Middle Pillar. A rampaging battery, forging forward, beyond that into a beneath-the-darkened-surface tunefulness to their doom, not alien to the band before but easily forgotten in memories of riffs past. They truly test the limits of exploration of their dual membership, excelling beyond what you think can be possible.. and I've already broken my opening paragraph promise... sorry.

This is the first of a bookend of the darkest material on offer, more familiar dense doom tracks, the twelve minutes plus of Limitless Light, closing out the album, possibly the heaviest track they've recorded. A quiet beginning is shattered through an atomic flash of heaviness exploding into deep chasm doom, lurching through the shadows, picking us all off one by one, crushing all will.

Between these pillars lie less familiar territories. Acoustic guitars, occasionally with a country twang, shuffle of a faint hand drum all build a vivid scenery. Crucible attempts to align both these extremes, four minutes of low key blues, a husky Nick Cave style vocal drawls through the morose contemplation, rudely broken with a fuzzed doom awakening. The contrasts between the extremes cause blood pressure fluctuation, the riff thrill enlivening one moment, the sorrowful laments dampening spirits the next.

Ain-Soph Aur is an album that doesn't follow the script you'd expect, whether you're familiar with In the Company of Serpents before or not. Instead an unforeseen narrative is depicted, one of unanticipated plot twits and chapters that go down right angled paths from the established central story. It makes for an album full of character and depth. All hail In the Company of Serpents, for they continue to refresh, surprise and excel.