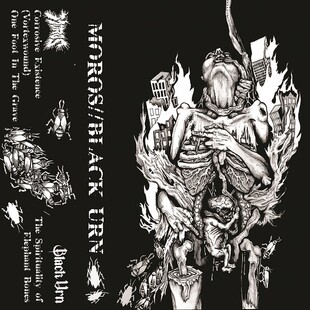 A doom pairing from Philadelphia, both bands from the darker ends of the spectrum, creating a split tape that offers little in light.

That said, Black Urn's solitary offering, The Spirituality of Elephant Bones, begins with over a minute and a half of acoustic guitar, before finally spreading its wings into an almost death/doom, fuzz and growl rhythm. This is utterly lethargic, in the way only doom can be, musicians lost within a cloudy mind, struggling to maintain a grip on reality and any sense of three dimensional forward momentum. The delicate touch returns two thirds in, but is quickly flattened by a thunderous drum roll, malicious venom washed forth amid the waves of some degree of velocity. As it nears its end it starts to head into My Dying Bride grandiosity, but oddly gives up just as quickly. It never clicks forward into something amazing, but is intriguing and consistently enjoyable.

Moros fit in thrice that of their partners, all of which are entombed within an effect laden deep smog, a buzzing as if recorded beneath the flight path of a swarm of locusts. The crunching guitars and grindish start of the otherwise sludgy Corrosive Existence give way to a noise track of basic drum, effects and vocals that could be the exhortations of a satanic being. One Foot in the Grave closes, a song title you can understand as seeming suitably grim, yet to us Brits raises a slight snigger, but then perhaps it is purposeful - it is as misanthropic as Meldrew. This is harsh hardcore tinged sludge, always downbeat, driving the release off the edge of a cliff just as you think you've survived the ordeal. Good stuff.

Nothing mind blowingly new here, but a couple of really good tracks, one from each; a cassette worth tracking down, and two new bands to add to your radars.